One has to wonder how the Bears expect Cutler to run an offense when this is what happens at home with the kids when Kristin Cavallari is away. Cavallari had apparently just arrived at the airport when this exchange took place: 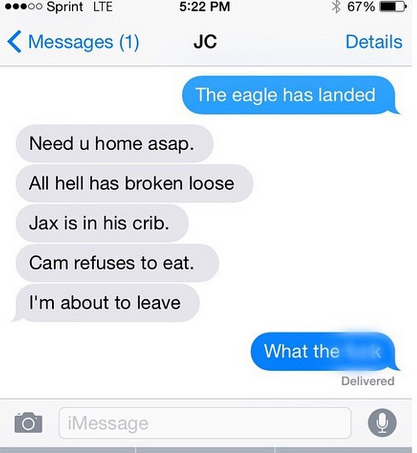 Jaxon is 2 and Camden is 8 months old.

[Edit 2/1/15: After getting some comments from friends on this post it occurs to me that I need to point out that I am, indeed, joking.My sister in law was pregnant with twins (they would have been her third and fourth child) and my mother was going on about how much fun it was. My father turned to me and said, “She doesn’t remember. You were three, your brother was two and we had newborn twins. There were evening where all I could do was shut the door, sit on on the bed and put my head in my hands.”Don’t worry. I don’t like Cutler but I wouldn’t blame him for this.]

One thought on “Updated: Typical Cutler. And Other Points of View.”