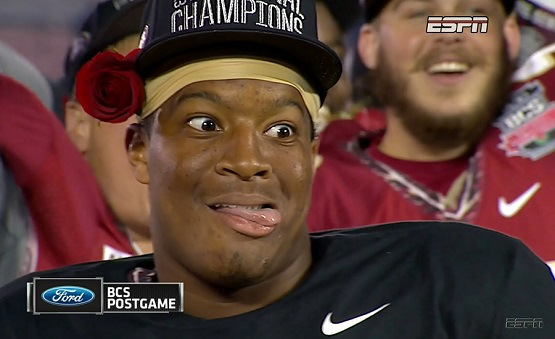 “‘I’ve been fighting with this thing all along. There have been two issues for me with Winston. Number one is on the field. He threw 18 interceptions this year. On a team that arguably had the best talent in the country, he continued to put his team at a disadvantage almost weekly,’ Mayock said on NFL Network’s ‘Path to the Draft’ Wednesday. ‘ … Off the field, regardless of what did or didn’t happen in that alleged rape, he continued a pattern of poor decisions throughout his career. The bottom line for me is, can you trust him off the field?”

I don’t think that’s two issues. I think its one.

Winston’s problems on the field and his problems off the field are the same issue – he’s impulsive. He does stupid things on the spur of the moment without thinking about the consequences. That leads to interceptions on the field and to dumb mistakes like screaming obscenities in public and having sex with drunk college girls off the field. Whether you think it should drop him in the draft or not, he’s one guy with one serious issue. Keeping that tendency from hurting him – no matter where he is – will be the challenge of whatever team drafts him.