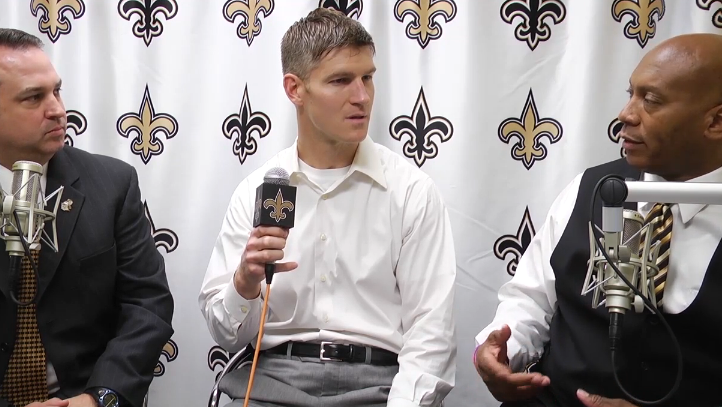 I’m a Bears fan. But every once in a while, I have to write a post that really angers other Bears fans. This is going to be one of those. Consider yourself warned.

What is getting me started today is a post by Brad Gagnon at the Bleacher Report. In it he tries to figure out why the performance of quarterback Drew Brees has declined since the Saints won the Super Bowl in February, 2010. Or, more accurately, why his apparent performance has declined. Here’s what he concluded:

“This is a team sport, and quarterbacks are often affected greatly by the circumstances surrounding them. That could mean weapons (or lack thereof), support from the running game (or lack thereof), pass protection (same deal), defensive efficiency (which alters scenarios and forces quarterbacks to take more or fewer chances), play-calling (i.e. balance) and the offensive philosophy under which they’re working.

“And the reality is, there are some rather strong indicators that Brees has mostly been just as strong as he used to be.”

“[B]rees has to be held at least partially responsible for what has happened to the Saints since that 2009 Super Bowl, but a lot of the time it feels as though he’s forcing things merely to compensate for the issues those around him have been experiencing. “

“Quite simply, the Saints are getting worse by the year. So it shouldn’t surprise anyone to see Brees struggle in certain areas, particularly when it comes to trying to make things happen all on his own.

“Consider all the losses the Saints have suffered in free agency the last couple years (Jermon Bushrod, Sedrick Ellis, Jonathan Casillas, Brian de la Puente, Roman Harper, Will Smith, Lance Moore, Malcolm Jenkins, Patrick Robinson, [Pierre]Thomas, [Kenny] Stills, [Cutis] Lofton, [Jimmy] Graham), their inability to hit it big in key draft spots, and that they basically lost an entire season due to the penalties handed down and the distractions from the bounty scandal.

“Consider all of that, and you begin to see Brees as a victim. “

Perhaps Bears fans should also consider that Bears general manager Ryan Pace has been their director of pro personnel and, more importantly since 2013, the director of player personnel.

To be fair to Pace he became director of pro personnel in 2007 and undoubtedly helped build that Super Bowl team. And, as pointed out by Gagnon above, there are a lot of factors behind the decline in the Saints since, some of which Pace couldn’t have had anything to do with. But there’s no denying that some of it is the football players surrounding Brees and a lot of it has to do with misses in the draft that forced the team to lose some veterans and over-pay to keep others. Was Pace making all of the personnel decisions? No. Saints head coach Sean Payton has final say. But, as former NFL general manager and Bears consultant Ernie Accorsi pointed out, a good part of the reason Pace was hired was because it was believed that Saints general manager Mickey Loomis was a finance guy and that Pace was the driving force behind many of the personnel decisions:

“I always look at who’s making the player personnel decisions on a team, and do they have players they’re getting in the middle rounds they’re winning with? You have to do that today. You only have seven picks, and the draft is still your lifeblood.

“And I look at the Steelers — that’s why I think (GM) Kevin Colbert is so good. They have third-, fourth-, fifth-, sixth-round draft choices that they’re winning in the playoffs with every year. And New Orleans rebuilt that team in a hurry, and that’s how they rebuilt it. Listen, Brees was a big pickup and all. That’s fine. But you look all through that line, and you have players playing all through those two lineups that they picked in the middle or lower rounds. So, on paper, I thought, ‘Someone has to be making the right decisions here.'”

Or the wrong decisions.

Payton is widely believed to be remaking the Saints roaster this off-season because he thought that the players that they have are talented but too soft. That’s led him to make deals like trading away Graham to get tougher on defense and along the offensive line and to improve the running game. The question is, why were they soft in the first place and who was advising him to take these talented but ultimately flawed football players in the first place?  And where are all of the drafted players that were supposed to step in for these veterans that every good team loses and needs to replace to sustain success?

It’s hard not to think that the responsibility is partly, if not largely, Pace’s.  And further it’s not a stretch to wonder if all of these professions of sorrow at seeing Pace go by members of the Saints organization aren’t hiding small sighs of relief.  Given the make over that the Saints have been forced in to partly by poor personnel decisions, practically speaking the loss might not have been all that great.

I’m not passing judgment on Pace before he even gets a chance with the Bears. He’s a young guy who has a lot to learn. The indications are that he’ll also have some support from other, experienced, well-accomplished people, not the least of which will be Bears head coach John Fox. But all we have to go on right now is recent past history. And that means facing some ugly facts no matter how much it pisses people off.