Steve Rosenbloom at the Chicago Tribune previews the Bears game against the Chiefs:

“[Shea] McClellin, the wrong linebacker chosen by the wrong general manager, hasn’t made a play in the passing game this season. And now he gets this guy.

“McClellin, who’s playing inside linebacker because there’s no one else to coach, seems perpetually in the trail technique. And now he gets this guy.

“The Chiefs offense will throw the ball between the hash marks. It will create picks and decisions because Andy Reid loves high-low routes, especially crossing patterns. It will teach us about McClellin’s progress, athleticism and instincts.”

Presumably Rosenbloom picks on McClellin because he’s the former first round pick – and I won’t say he’s wrong to do so. But it’s worth pointing out that his teammate inside, Christian Jones hasn’t been much better. Both look lost in coverage.

Having said that, both should get plenty of help this week. The Chiefs have one wide receiver who can catch the ball down field and that’s Jeremy Maclin. The Bears will undoubtedly do what the Bengals did to Maclin last week – roll the safety to his side. Other than that the entire Chiefs offense is short passes and handing the ball off to Jamal Charles and everyone on the defense except cornerback Tracy Porter and safety Adrian Amos will likely be keying on that.

Rosenbloom thinks McClellin is the key to this game but my money is on a patchwork offensive line. The Bengals made that pass rush look pretty ordinary last week and that gives hope that the Bears will do the same. But anyone who watched this team play the Broncos in week 2 knows that they’re ferocious when they’re on their game. And they’re almost certainly licking their chops at the thought of facing a very wounded Bears offense.

Forget McClellin and the Bears defense. The Bears will go as the offensive line goes this week. 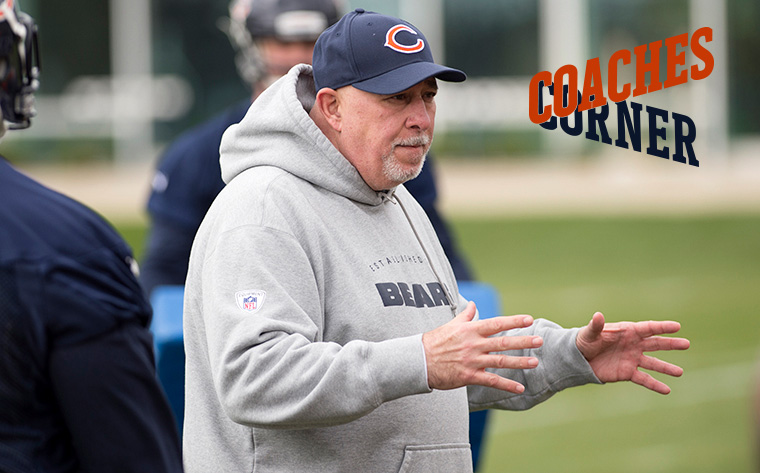 Brad Biggs at the Chicago Tribune thinks that history should provide a lesson for Bears general manager Ryan Pace:

“It’s easy to point to busted draft picks and say that is why [former Bears general manager Jerry] Angelo was dumped after 11 seasons, but trace his problems closely and they were rooted in not maintaining the offensive line.

“In a span of five drafts from 2003-2007, the Bears had 42 total picks with 23 coming in the top four rounds. Only one of those 23 was an offensive lineman and only three linemen were selected overall — one in the sixth round and two in the seventh. The fourth-rounder, Josh Beekman, made 20 starts and didn’t pan out.”

As Biggs points out, Angelo ended up relying too heavily on free agency to stock the line. But in fairness, this isn’t entirely his fault. Offensive line coaches simply have to be able to develop players that are drafted in later rounds or that are found as street free agents. It was former Bears offensive line coach Aaron Kromer‘s specialty and it was what made him so attractive as an offensive coordinator under Marc Trestman.

You can’t rely entirely on late draft picks and rookie free agents. That’s been proven, particularly at left tackle. But putting together a good offensive line is a combination of good drafting and development. If either breaks down, you’re going to fail.

In the case of the current Bears line, I’m encouraged that Charles Leno in particular was able to step in and play so well last week. It’s a very small sample size to be sure but it’s a hopeful sign that offensive line coach Dave Magazu knows what he’s doing and that he can develop talent at the position. Let’s hope it continues. They’re going to need Leno and a whole lot more this Sunday.

Rich Campbell at the Chicago Tribune obliterates some of my pre-conceptions about game planning:

“As is common throughout the league, game-planning duties are spread among the Bears’ offensive assistants as a starting point for meetings on Monday, Tuesday and Wednesday nights.”

I always had this notion in my head that offensive game planning consisted of the coordinator sitting alone in his office until 2AM watching film putting it all together. It never occurred to me that all of the coaches might share in the duty.

A couple thoughts on this. First, this means that the offensive coaches better get along pretty well because they’re going to spend a lot of time together. I remember stories of offensive coordinator John Shoop, then under head coach Dick Jauron, throwing wide receivers coach Todd Haley out of meetings because things got so heated. No wonder the offense was such an unmitigated disaster.

I also think its interesting that all of these coaches are basically coordinators in training. It’s one additional explanation for why promoting from within is so common in the NFL, particularly with successful units. You can’t say that anyone on the staff has never put a game plan together before because they all have. And since they’ve all been working even more closely together than I previously thought, breaking up the relationships seems even more foolish than it would have been anyway.