David Climer at The Tennessean looks into the validity of the rumors that the Titans will draft a quarterback of trade for Jay Cutler or Philip Rivers.

“Who, then, will be the Tennessee Titans’ starting quarterback when the regular season opens in September?

“This is how the Titans roll. They’ve got a plan and they’re sticking to it.”

I absolutely believe this. I’m not 100% convinced that they won’t trade a bag of balls for someone like Cutler as insurance (though I doubt it). But I genuinely believe that the Titans want to see if Mettenberger is their future and I don’t think they’ll draft a quarterback high in this draft.

If the Titans stick to their guns here, they’re gong to be bucking a serious trend. The general belief is that you find your NFL starting quarterbacks in the first and second rounds. Not much consideration is ever given to lower round picks anymore. Mike Huguenin examines the situation. Note that the Rams and Eagles both had two quarterbacks who started eight games:

“Six quarterbacks were second-round picks, including two who were the second quarterbacks selected in their respective drafts.”

There’s a part of me that thinks its nice that the Titans are giving a sixth round draft pick a chance to develop. There’s an underdog quality to the story and I’m rooting for him. At the same time, like many others, I’m wondering what the Titans see in Mettenberger that most of the rest of the world doesn’t.

It could be very good news for late round quarterbacks if Mettenberger works out and the rest of the copycat NFL follows their lead. I think underrated guys like East Carolina’s Shane Carden are too often dismissed and deserve more of a chance. On the other hand, if the Titans are deluding themselves into thinking Mettenberger is a gem that he’s not, they’re going to be kicking themselves for not taking a quarterback in the part of the draft where virtually everyone else currently agrees that you find one.

I’ve heard over and over again about how Jay Cutler‘s statistics from last year are better than fans give him credit for. The Bears had the 16th best overall passer rating of any team in the league. Not too bad you say? Let’s take a closer look, shall we? 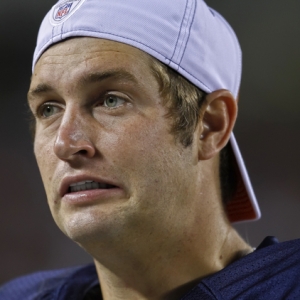 Cutler padded those stats with the third most yards of all NFL quarterbacks from screen passes. And where did “Mr. Clutch” rate in the fourth quarter only? The Bears were 26th. And that’s even after padding the stats in the second half of blowout losses to the Packers and the Patriots. From Steve Palazzolo at profootballfocus.com and from sportingcharts.com.

If you are going to use statistics to defend your argument, I’d suggest that you at least take a deep dive.  Even then, I’d say that if the number doesn’t pass the eye test, trust your eyes.  They do a lot better job of drawing conclusions from complex situations than a one dimensional number ever will.

Most of us were surprised and a little disturbed that after drugging and raping nine women in four states, former NFL safety Darren Sharper only got 10 years in a plea deal. But as documented by Mike Florio at profootballtalk.com, the deal involves quite a bit more than that:

“Among other things, Sharper must consent to a penile plethysmograph test, in which a sensor will be attached to his genitals for the purposes of measuring arousal in response to specific stimulants.”

“He’ll be required to permanently wear a GPS device, and he’ll be prohibited from ever attempting to contact any of his victims.

“Sharper also is prohibited from possessing or consuming alcohol — for life — and from ever entering a bar. He’ll be required to provide urine or breath samples upon request from law enforcement.”

OK, so most of that makes sense. But not all of it.

A “penile plethysmograph” is a test that basically measures the blood flow to the penis by measuring its circumference. The measurement can be made in response to certain stimuli to distinguish groups of men with biastophilia (paraphilic rape in which sexual arousal is dependent on, or is responsive to, the act of assaulting an non-consenting person).

So my assumption was that Sharper has biastophilia. Apparently not. So now I ask myself, if he gets it, why? What do you do to develop this? Is it a suggestion that you’ve raped another woman? Or is it just a suggestion that all of the sudden, presumably for some other reason, you just want to? What are you going to do if he fails the test? Send him to jail for being sick in the head?

I’m not sure I understand any of this. Perhaps more explanation will be provided at another point.