“What are youth and middle age in the NFL today?

“The NFL Players Association loves to promote the idea of the average career of an NFL player being 3.3 years, but Roger Goodell disagrees.

“The commissioner recently explained the union’s numbers include everybody with a contract but in fact the average career of players who start their rookie seasons on an NFL team’s 53-man roster is just under six years.

“Either way it suggests players need to peak somewhere between their second and fourth seasons.”

The names of the only two Bears players in their fourth season may surprise you: Alshon Jeffery and Shea McClellin. These are players that I think virtually all of us are used to thinking of as young. They’re not. They’re middle aged and arguably on the decline already.

Jeffery is very productive but McClellin is basically still a developmental prospect. Indeed, the Bears are likely starting him over veterans like the released Mason Foster in large part because they believe that he still has a higher ceiling. But does he really?

Hub’s purpose was to point out the players that Bears fans should be following the development of in particular as the future of the franchise – those in their first and second years as pros. These include Kyle Fuller, Ego Ferguson, Will Sutton, Christian Jones, Terrance Mitchell, Eddie Goldman and Jeremy Langford.

But to me it’s a reminder of how terribly far away this team is from building a respectable roster.

Sam Monson at Pro Football Focus reviews the performance of the Seattle Seahawks offensive line against the Rams. This observations match what I see:

“The Seahawks still scored 31 points in this game, and can rightfully point to the defense as an unusual source of blame, but Russell Wilson was under pressure 19 times in the game and the running backs often found themselves with nowhere to go. Over the course of a game these things can be overcome, but over the course of a season they will start to erode the team’s production.”

The Seahawks traded away their best offensive lineman in Max Unger in order to get tight end Jimmy Graham. The statement was clear – skill position players are more important and harder to find then lineman. The Seahawks are paying for that decision and likely will throughout the year.

Admittedly offensive lines have a tendency to gel and become more cohesive as the year goes on. If they stay healthy. And admittedly this particular offensive line didn’t get much time together during the preseason because the coaching staff spent a good part of it juggling their lineup in an effort to find their best five guys.

But I’ve said it before and I’ll say it again. Football games are won and lost at the line of scrimmage. The Rams have an outstanding front seven. But so will the teams that the Seahawks will face in January (if they make the playoffs at all). They’re going to face a serious uphill battle if things don’t get a lot better soon.

Cincinnati cornerback Adam “Pacman” Jones was fined $35,000 for ripping the helmet off of Oakland receiver Amari Cooper and slamming his head into it on Sunday.

Jones plans to appeal responding, “It’s magnified because it’s me.”

Patrick Finley at the Chicago Sun-Times answers your questions:

“A: For who? Neither second-year player Lamin Barrow, who had been with the Bears less than a week, or rookie John Timu played a defensive snap Sunday. Barrow has played 49 defensive snaps in his pro career. That could change, sure, but starters Shea McClellin and Christian Jones are being given every chance to hold down their jobs.” 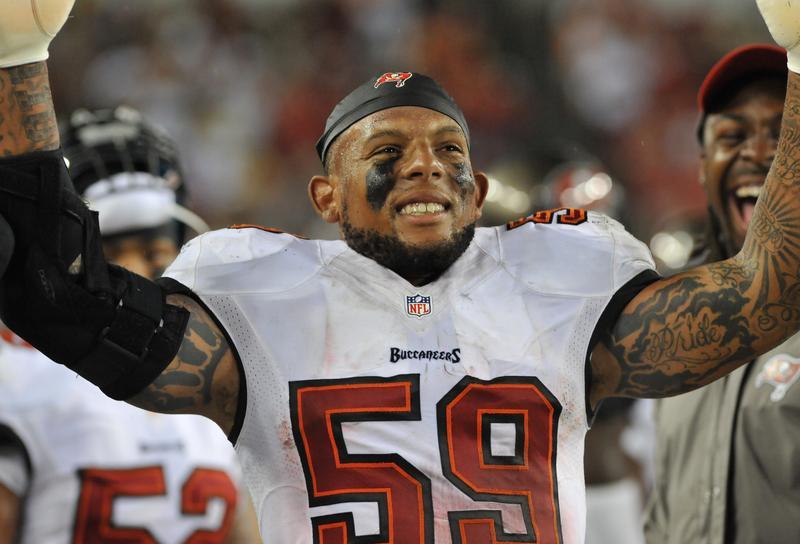 Steve Rosenbloom at the Chicago Tribune is excessively tough on the Bears in his Tuesday column. But one thing that he had spot on was the disturbing lack of pass rush Sunday:

“This is, what, Tuesday, and the Bears still haven’t touched Aaron Rodgers.

He’s right. The outside linebackers did a good job on Sunday against the run. But they get paid to rush the passer and they get paid a lot. Packers quarterback Aaron Rogers was not only barely touched on Sunday, they barely got close.

The Packers offensive line is good when its healthy. But they’re not that good.

The Bears aren’t going to beat many teams without a pass rush. The Arizona line isn’t exactly a strength of their team and and their quarterback Cason Palmer is a statue that won’t be running around the way Rogers did.  So there will be an opportunity to improve this coming Sunday. If the Bears don’t, it will be very disturbing. Buckle up.

The Chicago Bears waived David Fales on Tuesday, another indication that they are fully confident in Jimmy Clausen’s health after he sustained a concussion in the Bears last preseason game.

Its unlikely at this point that anyone will pick up Fales, a former sixth round draft pick, off of waivers.  Fales showed decently during the preseason but he’s unlikely to ever be anything other than a back up in the league.

The Bears have an open spot on their practice squad and undoubtedly have plans for Fales to fill it.  It will be interesting to see what they plan to do with the opening that the loss of Fales creates on the 53 man roster.