“Brian Urlacher’s injury gets all the attention, but [defensive tackle Stephen] Paea and his injury expose two problems: The depth at defensive tackle is questionable, and more importantly, the talent at that spot has not proven to be game-changing consistently.”

I had high hopes for Paea this year. He might still come through but this is the kind of early setback that tends to have ramifications that last into the season.

“But it’s practice. You got to do it,” he told Fox. “I think just the shock of being out there so long and doing so many movements like that was too much for my knee.”

The longer practices are a result of the collective bargaining agreement limiting the number of days a team can practice and how much contact there can be. So if Urlacher is correct its ironic that he has his own union to blame for worsening the injury.

“Chris [Williams] is a very smart guy,” Tice said. “He figures it out very fast. The one thing he doesn't do is make mental mistakes.”

This is, of course, the issue. The Bears really want Webb to win the job but they aren't going to put up with the mental errors this year. What's particularly frustrating is that Webb's mistakes should be easily corrected. But for whatever reason he just can't seem to be able to concentrate. One more offsides penalty in a preseason game might be the end of Webb as the left tackle. And, based upon this quote via Jensen, I think Webb knows it:

“'I feel like I am doing what Coach is asking me to do,' Williams said. 'Trying not to make any mistakes. I'll let the rest sort itself out.'”

Biggs sums up the situation very well as amply later in the week:

“[J'Marcus] Webb vs. Williams: Maybe this would be more accurately described J'Marcus Webb vs. himself.”

“Third-year defensive end Corey Wootton got a chance Thursday to measure how far he has come. Wootton, who started the exhibition game against the Broncos as Peppers rested, matched up against Ryan Clady, one of the top tackles in the league.

“Wootton was far from perfect, but he held his own on a few plays.”

‘‘'We’re going to keep things pretty basic,' said Cutler, who didn’t play in the preseason opener against the Denver Broncos last week. 'What we unroll against the Redskins isn’t the final product.'

“'We want to get in and out of the huddle. We want to execute plays. But it’s not going to be the end of the world if we’re not clicking on all cylinders.'”

“'You rely on that in emergency situations,' Haley said. 'When you make a bad call, or there's a breakdown up front or with the back, or something doesn't go the way it's supposed to, you have a guy that can get you out of trouble better than anybody else.

“'You don't just drop him back and say, 'Hey, work the field.' If you do that, you're going to be watching him dive and keep plays alive all the time. But those are also situations where he's put in harm's way.'”

What Haley's is saying is that he wants Roethlisberger to drop back and get rid of the ball. that doesn't appear to be an option with Cutler, who simply cannot throw with anticipation which is the reason he didn't get along in former offensive coordinator Mike Martz's offense. It will be interesting to see if Roethlisberger can make the adjustment.

“Everyone knows how good (Bill) Belichick is. John Harbaugh has come into Baltimore as a special-teams coach and done an outstanding job. We saw (Bears special-teams coach) Dave Toub get head-coaching consideration in Jacksonville last year. His special-teams units are one of the best in the league year after year. He’s a former strength coach like (Bears GM) Phil Emery. The Bears went into their pipeline to find the new GM. I’m not so sure the next head coach is not on staff already. You've got two coordinators (Mike Tice, Rod Marinelli) who have done it, but the one who hasn’t, I think, may be the most ready.”

There are a couple things that interest me here. 1) This personnel man assumes that Lovie Smith will be fired at the end of the year (meaning they aren't headed for very good things). 2) He's targeted Dave Toub to replace him. Toub is certainly deserving of a head coaching shot and would be a facinating candidate. But picking someone from the staff may not be enough of a change to satisfy most fans.

“Dimke initially kept calling [current starter Jason] Hanson, who is 20 years his senior, “sir.” Hanson eventually told him to knock it off.”

“After a crunching collision between multiple Raiders and Kolb behind the line of scrimmage early in the second quarter, defensive lineman Tommy Kelly said as he made it to the sideline, 'That boy’s scared,' according to the Raiders TV broadcast being streamed through NFL.com’s Preseason Live package.”

“'I know in Chicago it was mainly two, three deep (coverage),' [Redskins coach Mike] Shanahan said. 'He is more of a safety like he was in New England, a box guy who plays a lot of different coverages. I’m not sure he’s a very good straight two deep or three deep player. But our scheme kind of fits what he does. And I like the time we’re getting him. Whatever happened in Chicago, he has to come in here and fit in. I’m hoping he keeps playing at this level.'”

Translation: “The Bears misused him.” I'm not sure I buy that, though. Meriweather's problems with Lovie Smith really had more to do with discipline on the field, I think.

“New England, I think, is going to dry up. The quarterback (Tom Brady) is on his way down and I don’t think he’s surrounded by the same amount of talent he was earlier in his career. The other one to me that is on the downswing is New Orleans. We’ll see if (Drew) Brees is worth everything they put into him. There are a lot of good teams out there. It was a different game last year with the lockout ­— and it favored teams like the Patriots and Saints.”

“It’s easier to know who to block when you are facing a four-man front, and that ultimately translates to better quarterback play. As an offensive guy — I can tell you — the 3-4 (front) is more difficult to play against. I think you see a lot more quarterbacks with the deer-in-headlights look when they’re dealing with ‘30’ fronts. It’s more difficult to decipher. Why do you think (Peyton) Manning has the hardest time with the Chargers? It helps if your secondary can be great window dressers, showing three deep and playing two, but there is no disguise as effective as surprising quarterbacks with the rush. … The trend moved toward the 3-4 a few years ago. Now it’s trending back toward the ‘40’ (front).” 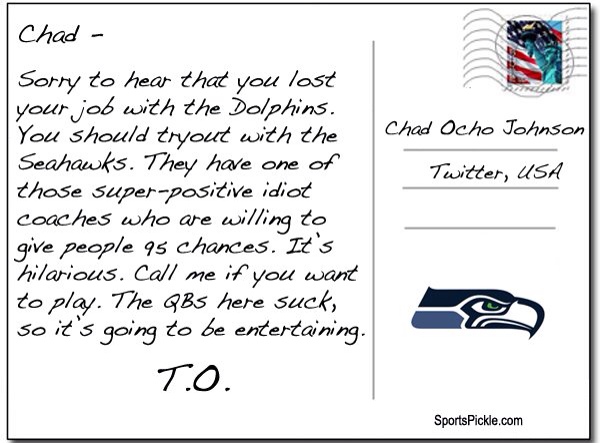 “This guy is usually a combination between The Late-Round Project and The Undrafted Superstar. Except he’s white. And he probably already has sold 5,000 jerseys. But it’s not so much a racial thing, it’s just that … I don’t know … a lot of fans identify with him somehow.

“It could be because chances are he’ll be just like them in a few weeks in that he also won’t be employed as an NFL football player.”

TIm Tebow appears to developing chemistry with his favorite target in Jets camp. From The Onion:

“'As we get into camp, more and more often Tim has been throwing to the ground,' center Nick Mangold said. 'During plays, he just has this instinct for finding the ground every time. It’s becoming apparent to everyone on the team that the ground is Tim’s go-to target.'”