“There were plenty of warning signals for the Cowboys to heed and [owner and general manager Jerry] Jones released a statement Wednesday night explaining that the Cowboys spent considerable time trying to get to know Hardy. 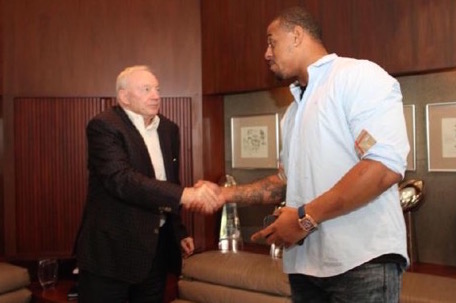 “But there are others who know him, too.

“It was startling, on Wednesday, to hear a former Hardy teammate say publicly that he was sometimes unmanageable, and for Tampa Bay Buccaneers general manager Jason Licht to explicitly tell the Tampa Bay Times that the Bucs had stopped pursuing Hardy not for contract reasons but because ‘at the end of the day, we didn’t feel good about it.’

“It is rare for a team executive to be so candid about an active player and rarer still for a former teammate to break locker room camaraderie to air issues about a player who is trying to restart his career. But make no mistake, they were far from alone among those who evaluated Hardy over the last few weeks… [M]ost teams did not even give him a look and, at the end, it appeared that the Cowboys were bidding against themselves for Hardy’s services.

“‘He was a mess coming out of college,’ one NFL team executive said, when asked why his team did not go after Hardy. ‘He had a number of issues then and his behavior since entering the NFL hasn’t proved him to be anything different.'”

“Whether you find that problematic probably depends on whether you root for the Cowboys.”

“There isn’t much doubt that the Cowboys’ defense is better now than it was in that loss, and by the time another late-season game against a top quarterback rolls around, that might be all anybody is thinking about. But the tone-deaf celebratory nature of the Cowboys’ Hardy announcement — smiles and exclamation points all around — suggests that the message from those ‘No More’ public service announcements (in which the Cowboys’ own good guy, Jason Witten, was featured) ultimately gets drowned out by the demands for better results.

“There’s nothing surprising there. There was a similar din when the Philadelphia Eagles signed Michael Vick after his stint in a federal prison. The protesters were outside the gates for his first appearance in a game. But they dwindled rapidly as Vick showed contrition and, probably more significantly, that he still had some game left. Fans wore his jersey again and, in recent seasons, he was even hailed as a veteran mentor.”

I think Battista might be surprised on this one. Vick was found guilty and paid the price by going to jail. This is different. And the tolerance for these kinds of things is considerably less that it was when the Eagles signed Vick. Players like Adrian Peterson who immediately express remorse will get some slack from fans. Hardy might not, even from die hard Cowboy fans who hold the integrity and history of the franchise sacred.

“Going forward, Hardy — and [Ray] Rice and Adrian Peterson, too — will be good tests to find out just how much our historical love of a second chance stretches to include even the most despicable acts. Hardy’s jersey sales will tell us plenty.

“For some, at least, that seems to be all the evidence about Hardy that matters.”

I came to the conclusion a long time ago that my team often wasn’t any better than the others when it comes to doing some things that I personally think are flat out wrong. I’ve slammed opponents for doing things like not letting the Bears interview a coach to give him the opportunity for advancement to coordinator only to see the Bears do the same thing the very next year. I’m still revolted by the fact that the Bears didn’t give Baltimore their fourth round pick in a trade the Bears, themselves, were at fault for botching a few years ago.

No one can really say that their team is immune.

Bottom line, I won’t be buying any Greg Hardy jerseys and I don’t know anyone – Cowboys fans or not – who will.  But having said that, I don’t judge other teams actions much anymore. I just hope like heck, the system having failed, having gotten away with it once with both his freedom and his high paying job intact, that Hardy doesn’t do it again. Because he sounds to me like the kind of off balance character who might.  And whether he plays football or not, that’s what really matters.