The Jaguars are going all out to win in March while continuing to lose during the season.  They have also spent lavishly to sign cornerback A.J. Bouye and defensive lineman Calais Campbell.

Last year they out bid the world to sign the top defensive lineman on the market, Malik Jackson.  They finished last in the AFC South at 3-13.

The report reminded me that the Bears haven’t yet addressed a very under rated need this offseason.  Whenever nose tackle Eddie Goldman was lost to injury, the Bears were lost for a replacement.  Will Sutton did his best to hold down the fort but he’s a weakness in the middle that could be, and was, exploited.

Poe, of course, was never going to sign with the Bears.  He’ll be far too expensive to sign and put in as a rotational player.  But there’s little doubt that the Bears could use some depth in the middle of their defensive line and a decent player should be available for the signing as the league enters the latter part of free agency.

“Kevin White, Alshon Jeffery and … in the slot?

“That’s a good question and the Bears have a variety of options at this point after the draft. Right now, I’d be quite surprised if Eddie Royal wasn’t the slot receiver. For starters, his $4.5 million base salary for this season is fully guaranteed, so he’s not going anywhere. Royal dealt with some injuries last season and wasn’t the player the Bears were expecting but he’s got a track record for producing and a history of working well with quarterback Jay Cutler.”

I tend to agree with Biggs’ assessment here. Royal didn’t have a great season in part because of the injuries and in part because the Bears started him on the outside for the first month of the season.

One reason Royal came to Chicago is because he felt that he could be more than a slot receiver and the Bears gave him that chance. But it was obvious on October 4 when the Bears played the Raiders and they moved Royal back to the slot that’s where he belonged. Royal had 6 receptions for 80 yards that game after getting only 12 for 117 yards total for the first three games before that on the outside.

I think a lot of people are rooting for seventh round pick Daniel Braverman and at 5’10” he seems to have taken on the annual role of the little underdog, try-hard, white guy. He will compete, I’m sure, but let’s not lose sight of the fact that Braverman is probably special teams and depth. When he’s healthy, Royal should be, and probably will be, the guy in the slot.

Brad Biggs at the Chicago Tribune from his excellent “10 Thoughts” column after the Bears – Raiders game:

“The biggest difference on defense a week after the Bears showed improvement in a loss at Seattle was the play of Tracy Porter. He stepped into the starting lineup even though Alan Ball, who was questionable with a groin injury suffered during the week in practice, was active. Porter looks like someone who will stay in the starting lineup after successfully handling an assignment to follow Raiders rookie wide receiver Amari Cooper from side to side.”

“His comeback [from a hamstring injury] against the Raiders was strong and while the Bears ultimately would surely prefer to have Kyle Fuller in a place where he can be the matchup cornerback, he’s not there right now. The Bears have to hope he sees elements of Porter’s game in this scheme that can help him improve along the way.”

I like the way that the Bears handled Cooper, who is the Raiders biggest offensive threat by far. It’s true that the Bears chose to put Porter on him, a show of some confidence. But its also true that Porter got a lot of safety help – as well he should. You could argue that Fuller got the tougher assignment in that he was in man coverage on the other side most of the game without that kind of help. It was against much inferior receivers but still, its nothing to sneeze at.

To Cooper’s credit, he still found some success on Sunday. But the Bears limited him in a way that hasn’t happened often in the young season. As Biggs points out, there can be little doubt that the Bears will try to handle Jeremy Maclin the same way when they play the Chefs next week. 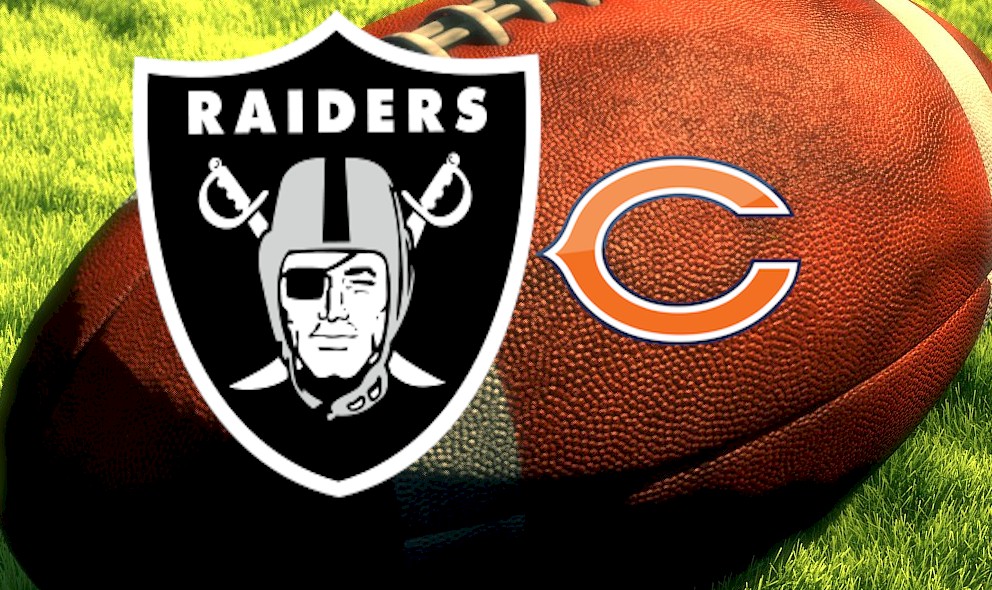 Brad Biggs at the Chicago Tribune gives 10 thoughts on Seattle’s win over the Bears. He addresses the fact that linebacker Willie Young was a healthy scratch for the game:

“Young was on the field for 19 of the defense’s 57 snaps in Week 2 against the Cardinals and got 21 of 60 in the opener vs. Green Bay, so he had been on the field for 34.2 percent of the snaps. Given the success of the pass rush against the Seahawks, it will be interesting to see how the Bears play the numbers game building the 46-man game-day roster for the Raiders. Clearly some decisions need to be based on special teams.”

This article was written before the Bears sold Jared Allen to the Carolina Panthers. The pass rush was, indeed, improved but Allen didn’t have much of a part in that.

The Bears hope that Young will continue to get better as he recovers from a torn Achilles tendon injury from last season. Getting him and Lamarr Houston, who is gradually coming back from his own injury, playing time was an issue that they obviously wanted to solve. Like Young, Allen didn’t play special teams and its now evident that one reason the Bears made this trade was to get him onto the active roster.

Allen’s trade was obviously the beginning of a fire sale for the Bears and there is a lot of speculation that Young, who also doesn’t appear to fit the base 3-4 scheme that the team runs, will be next on the trading block. But for now at least one alternative is that the Allen trade was an effort to get Young more involved. Assuming Young is still here to see the Raiders come to town, the odds are good that we will at least see him in place of Allen as a defensive end in the 4-3 nickel defense that the Bears run. Whether he stays or not might largely depend upon his performance.

Brad Biggs at the Chicago Tribune answers another question:

“Why didn’t the Bears claim James Jones off waivers before the Packers grabbed him?… Seem[s] Jones was much better than what the Bears had on their roster. — Greg M., Hayward, Wis.

“Jones was a vested veteran when the New York Giants terminated his contract and that made him a free agent, eligible to sign with any team he wanted. I am guessing GM Jerry Reese and coach Tom Coughlin regret that decision right now. New York released wide receiver Preston Parker earlier this week after five drops in two games. But this was not a situation where the Bears could have placed a claim for Jones. Even if the Bears were interested in Jones, why would he sign with them when he could return to a team and offense he knows to play with arguably the best quarterback in the NFL in Aaron Rodgers?”

Exactly. And it worth asking one further question – “How good would Jones (left) be without Rogers?”

Two teams couldn’t find room for Rogers on their roster – the Oakland Raiders and the New York Giants. Two quarterbacks, one an up and comer in Derek Carr and the other a veteran Super Bowl quarterback in Eli Manning, couldn’t find a way to get Jones the ball. What hope would he have had with Bears quarterback Jay Cutler?

The guess here is that only Rogers could have possibly made Jones as good as he’s been early in the season and its a graphic demonstration of how important he is to that team. How many of their receivers could succeed elsewhere? My guess is that the answer might be “not many”. I haven’t seen one yet who left in the Rogers era and made it anywhere else.

Chip Kelly is blinking “I would coach Texas” in Morse Code

I don’t usually shill for anything but I’m going to make an exception and recommend that readers support Hub Arkush at chicagofootball.com by becoming a Pro Member at the site. Hub is the former publisher of Pro Football Weekly, a magazine that went down with the dawn of the Internet age. He’s not always right and I often don’t agree with him but he’s usually willing to say things that other people aren’t willing to. We need more like him.

This is an informative site largely focused on the Bears. It also doesn’t hurt that its easy to navigate (though I could wish that as a paying customer I wouldn’t have to sell myself to Google to read some of the articles). It’s a good, reliable source for fans who want to go above and beyond in their understanding of what’s going on with the team.

One other thing in Hub’s article that I’m going to choose to take issue with is his continued, emotional defense of the Patriots in the “deflate-gate” scandal. Particularly his statement that Tom Brady and the NFLPA will “take their case to court as they did with Ray Rice and Adrian Peterson, and a truly unbiased judge will throw out the suspension completely after exposing it and the Wells report for the farces they are”.

I’ve stayed away from this as far as the blog is concerned because, after an initial gut reaction on the topic, I’ve decided that I’m not too worried about it. It’s not about football. It’s about the business that surrounds football and I’m not too interested in promoting that.

Nevertheless, I must say that I’d be very surprised if this went to court because in that case Brady would be forced to turn over his electronic communications under subpoena. That’s something I doubt very much he’d be willing to do given that he wouldn’t do it when he and his agent had control over what got turned over during the Wells investigation and wouldn’t do it. The Rice and Peterson cases were different – no one was withholding evidence. And let’s be honest, that’s what this case is all about now. When you are the NFL and you are charged with the investigation of a rules violations (or anything else) and you don’t have subpoena power, you are entirely dependent on the cooperation of everyone involved. That means you have to throw the book at teams that lawyer up in an effort to affect the outcome of the investigation and/or withhold evidence. It’s the only card the league can play in order to allow them to keep order in the league. As was the case with the Saints’ “bounty-gate” scandal, that’s what’s behind the severity of the punishment here.

In any case, I think we may be looking at a situation where Brady would prefer that the doubt about his guilt persists, even if the fact that he didn’t completely cooperate with the investigation does, as well.