Brad Biggs at the Chicago Tribune reports that the Bears have made a roster move on the eve of their match up with the Arizona Cardinals:

#Bears have promoted DL Brandon Dunn from practice squad to get needed depth on line. DB Demontre Hurst has been placed on waivers.

Hurst was signed by the Bears in the spring of 2013 as an undrafted free agent. He remained on the practice squad that year but made the 53 man roster in 2014. He was considered to be a young building block by the last coaching staff but his star had apparently fallen with the current group and he’s had a hard time finding his way on to the field with the starters. Nevertheless he’s been playing some special teams and I think we can expect him to be signed to the practice squad once he clears waivers.

Ego Ferguson is questionable for the Bears on Sunday and this would appear to be a bad sign for his chances of playing. Dunn, who occasionally flashed in the preseason with five tackles and two assists, will likely fill Ferguson’s role in the defensive line rotation on Sunday.  The Bears spent most of the game against the Packers in the nickel formation but are likely to spend more time in the base 3-4 against the Cardinals.  That’s where Dunn will likely be counted upon to contribute.

Josh Katzenstein at the Detroit News emphasizes that the Lions have more to worry about than Adrian Peterson Sunday:

“The Lions faced wide receiver Mike Wallace last year as the speedster caught five passes for 51 yards and a touchdown with the Dolphins in Week 10. On Sunday, the Lions will see him on a new team, the Vikings, and despite limited film of him in Minnesota’s offense, they’re expecting the same deep threat.

“‘He’s been in this league a little while, and he can run,’ Lions coach Jim Caldwell said of the seven-year veteran. ‘He can create problems for you. That’s the one thing I think that we don’t underestimate is they got speed on the outside. They can run and they can give you some problems.'”

Wallace wasn’t well utilized in Miami largely because throwing deep isn’t quarterback Ryan Tannehill‘s forte. It really isn’t Minnesota quarterback Teddy Bridgewater‘s, either, but the Lions will be packing eight the box (at least) in an effort to stop Peterson and that should open things up for Bridgewater in a way things probably never did for Tannehill.

This Minnesota – Detroit game carries a lot of significance. Each of these teams lost last week and looked bad doing it, the Vikings to the 49ers on Monday night and the Lions after a poor second half performance against the Chargers. The loser will have started 0-2 and will be digging themselves out of a big hole.

But, even more than that, both of these teams are planning to go to the playoffs. Assuming the Packers are going, that only leaves one other divisional team to take a wild card spot with the other facing a serious uphill battle. We’ll have a much better idea of who the division’s breakout playoff team is likely to be after this week.

Joe Lyons at the St. Louis Post-Dispatch reports that the Washington Redskins appear to have gotten into Rams defensive coordinator Gregg Williams‘ head:

“An original song from Gregg Williams.

“It’s a catchy little tune from the Rams’ defensive coordinator and has been featured this week as the team’s defensive linemen prepare to face the Washington Redskins on Sunday at FedEx Field in Landover, Md.

“The Redskins are a team that likes to cut-block. In fact, right guard Brandon Scherff, a highly touted rookie from Iowa, used the cut-block against four-time All-Pro Ndamukong Suh and limited Miami’s standout defensive tackle to just two tackles in the Dolphins’ 17-10 road win last week.

“‘That’s the little song that goes off in my head when I see them on the ground,’’ Williams joked after practice Friday at Rams Park.”

You can understand why.

A couple things ran through my head as I watched the Redskins offensive line block the Miami defensive linemen last week.

In any case, this is an issue that the Bears are going to have to deal with when the Redskins visit the Bears in December. Here’s hoping they’ll be prepared for it with a spring in their step and a song in their hearts.

“From @MDayne: How much of a project is [Tayo] Fabuluje? Any chance he contributes this year?”

“Originally I thought he’d need at least three years and might not crack the lineup until 2017. Now I’m thinking he will be ready to compete in training camp next season.

“Asking him to compete this year still feels like asking a lot.”

It does. But I’m far more high now on Fubuluje now than I was after the draft where he appeared to be a 6th rounder flyer that was unlikely to yield much. It says something about Fabuluje that he not only made the 53 man roster but that he seemed to be an option that the Bears were actually considering at right tackle in the preseason.

Fabuluje was well behind the more experienced Jordan Mills and second year man Charles Leno. But he appears to me to have far more potential than, either. At 6’6″, 342 lb he’s amazingly athletic for someone his size. I’ll be very much looking forward to seeing how he develops in the future be, it this year if he’s forced onto the field, or next year in camp competing to start.

Patrick Finley at the Chicago Sun-Times asks 10 questions going into the Bears game against the Cardinals Sunday:

“5. Why do the Bears have a more strenuous Saturday practice than most?

“‘Really, it’s just science behind it,’ coach John Fox said. ‘People used to shut it down on Saturdays. They’re saying now, getting a sweat or getting a lather on the day before you compete is actually a positive thing. It helps you sleep. It helps calm the nerves some.'”

I’m a huge believer in this even though I’m going to guess that at least some of the players don’t like it.

Most players undoubtedly want to rest as much as possible before a game and every time you hit the field, even if its just to work up a sweat, is an opportunity to get hurt.

Nevertheless, I’m quite sure this will result in better performance on Sunday and I wouldn’t be in the least surprised to see it catch on around the league. Anyone will tell you that Mondays stink. The reason most commonly given is that you are coming back to work after an enjoyable two day long vacation. And, hey, I admit that you need to rest.

But its more than that. Mondays are the days when we have to restart our engines. That takes time and, assuming you are like most people, you aren’t going to be working optimally for most of the day. The same thing undoubtedly goes for football players. Much better to keep that engine idling and ready to go right up until game time.

The Bears had a bad habit of coming out looking flat last year. And few things are more irritating than to hear a coach come out after the game to say that he “doesn’t understand it. They practiced really well this week.” Yeah, sure they did. But it didn’t carry over because all momentum was halted right before the game when it was needed the most. I don’t think that we’re going to be seeing this team come out unprepared to play mentally nearly as often this year.

The Cardinals have a great deal of speed at wide receiver with Larry Fitzgerald and John Brown. That’s going to be bad enough against a Bears defensive backfield that lacks overall speed. But Rich Campbell at the Chicago Tribune emphasizes another threat that the Bears defense will have to deal with:

“Cardinals tight end Darren Fells never played college football, but you wouldn’t know that from his Week 1 stat line: four catches for 82 yards and a touchdown.

“The 6-7, 281-pounder played basketball at California-Irvine and professionally in Belgium, Finland and Argentina. He spent the majority of 2013 on the Cardinals’ practice squad and since has developed into a threat.

“‘The biggest thing for a basketball player is: will he stick his face in the fan? Is he going to block anybody?’ coach Bruce Arians said. ‘Once he bought into how to block … he has become a really reliable player.'” 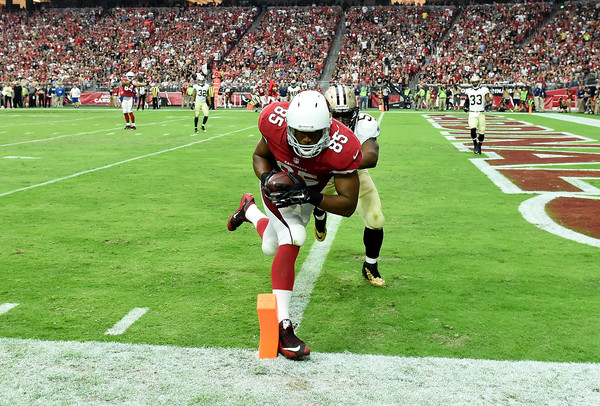 Fells will be a serious threat to a Bears linebacking corp that frequently looked lost in coverage last Sunday against the Packers. Bears fans will be looking for that to improve both this week and over the course of the season.

Rich Campbell at the Chicago Tribune reviews a few keys to Sunday’s game against the Cardinals. One thing that you expect to get from them is a lot of blitzing:

“The Cardinals blitz about 40 percent of the time, running back Matt Forte said. That’s a relatively high rate. Their frequent stunts and picks up front will test an offensive line operating with Kyle Long in only his second game at right tackle.”

“‘How you get people out of doing that is picking up the blitz and hitting plays on them,’ Forte said. ‘We have to not be afraid of, ‘Oh, they’re going to blitz,’ but, ‘OK, if they blitz, we have to hit them where it hurts.””

Campbell emphasizes the adjustments that have to be made along the offensive line. But at least as important will be quarterback Jay Cutler‘s ability to read the blitz in concert with his receivers to burn the defense. Both Cutler and the receivers have struggled with this in the past and frequent miscommunications have occurred. In particular, Cutler has a bad habit of missing free blitzers coming off the edge, especially from his left. Performance in situations where the Cardinals bring more men than can be blocked will be a key to Cutler’s success.

This will be another opportunity for the Bears coaching staff to show themselves to be superior to others the Bears have had here over the past two decades. The players certainly looked better prepared last week than we’ve seen around here in a while, especially offensively. Whether they can take the next step against a dynamic defense like the Cardinals is going to be a good question. I look forward to finding the answer.